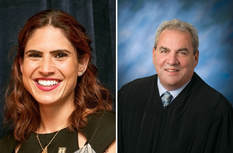 Alumna of Hillel Elected to Lead Hillel of Rockland Board

Hillel of Rockland County, Inc., has a new President and Vice President. The two new officers were elected to the executive board, along with re-election of the existing Secretary and Treasurer, at the August 17, 2017
meeting of the board of directors.

Ekka Adler of Nyack was elected President, and Scott Ugell, Esq. of Bardonia was elected Vice-President. Marsha Forman of New City and Tzipora Reitman of New Hempstead were re-elected to continue serving as
Secretary and Treasurer, respectively.

New President is a Hillel Alumna
Ekka Adler, Executive Assistant to the Chief Israel Emissary at Jewish National Fund (JNF), became involved with Hillel of Rockland in 2005 when she first enrolled in the Honors Program at Rockland Community College.
After taking off time to spend in Israel, Ekka returned to RCC in 2008, when she met Hillel Directors Rabbi Dov and Shevy Oliver , who began leading Hillel of Rockland the previous year. Through the Olivers’ friendship and mentoring, Ekka became very involved in Hillel. After graduating from Queens College in 2010 with a degree in Hebrew language studies, she knew her calling was in Jewish and Israel-related non-profit work. She has been involved in the Zionist youth movement Young Judaea throughout her life, attending their camps every summer and studying in Israel through their gap year program. Ekka fell in love with Israel and stayed an additional year, where she did National Service (Sherut Leumi), volunteering at a school for children with disabilities before making aliyah in 2010. Since that time, she has returned to the US and worked at Young Judaea before coming to JNF.

Ekka attends Hillel of Rockland alumni activities and is excited to represent students and alumni as President. “I am thrilled to bring new ideas to the table and collaborate with my esteemed board colleagues who have many years of experience as lay leaders for various organizations. Jewish and Zionist education, advocacy, and engagement are key to the success and future of Rockland’s Jewish community and to the global Jewish community. Institutions like the Hillel of Rockland are doing just that, and I am thrilled to help lay the foundation for future generations.”

Ekka, the daughter of Paul and Mary Adler of Nyack, NY, is engaged to be married to Harrison
Peck in August 2018.

Hillel Vice-President Brings Parent’s Perspective
Judge Scott Ugell, Esq., parent of RCC Honors graduates Sari and Rebecca, and father-in-law of Sari’s husband, Ziv Schwartz, joined the board of Hillel of Rockland after gaining an appreciation for the organization’s work through his children’s involvement.

Ugell was first elected as Town Justice in Clarkstown in 1991 as the youngest elected judge in modern Clarkstown Justice Court history. He presides over a special Domestic Violence Court, where he serves along with Family Court judges and other local judges and staff members.

Ugell graduated from Syracuse University’s S.I. Newhouse School of Public Communications in 1982, and Hofstra University’s School of Law in 1985. He is admitted to practice law in the State of New York, the Southern and Eastern District of the United States District Court in New York and the United States Supreme Court. After graduating from Hofstra, Ugell was a Deputy Town Attorney in the Town of Hempstead. Thereafter, he was a Court Arbitrator in New York City Civil Courts, and later became Assistant General Counsel to Pyramid Companies.

Judge Ugell is very active in the community. He is board chair of Big Brothers Big Sisters of Rockland; a member of the Jewish Federation of Rockland, New City Chamber of Commerce, New City Jewish Center, New York State Bar and Rockland County Bar Association, where he co-chairs the Bankruptcy Committee, and the Rockland County Magistrates Association where he was a past president.